Alfredo Santesteban (ALSANTE) is an artist, physician (retired), and non-fiction writer. He was originally from Rosario, Argentina where he was born in 1936. At the age of 30, he moved to the United States where he pursued medical training. After completing his medical studies, he began his own private practice in Illinois, and then in 1980, he moved to Texas (Dallas/Forth Worth Metroplex).

As a youngster in Argentina, he took drawing classes and was always tinkering with drawing and painting with tempera. He started a comic strip but had to stop due to obligations from regular school. All throughout his years in school and even in his medical practice he was always sketching, doodling, etc.

After retiring from his pediatric practice in 2007, having more free time, his artistic interests were reignited. He started a full-time career drawing and painting with great enthusiasm.

Ten years later, he has produced a variety of art pieces. Alfredo Santesteban (ALSANTE) spends his time in his studio, constantly searching for ideas and finding inspiration in things that are unique to him. 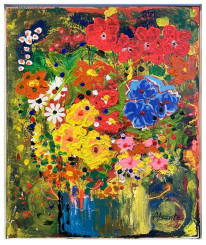